Lesson 29 – How I feel about having kids.

It has been a while since I last wrote but a lot of stuff has happened to me – the biggest change being that I finally moved to a new apartment close to my work.

Why is this such a huge deal?

For about 3 years I have been commuting with the train / tram to work. Between January 2019 and March 2020 this was a 2 hour commute each way.  Leaving my apartment at 7am and getting home at about 18:30 (after 19:30 during the Corona time). This eventually took it’s toll on me and left me quite empty, tired and lacking any lust for life.

Since April I now live approx. 20 mins away from work and it is truely a new life for me! I even cycle to work – something I never thought possible!

The result of this change is that I finally feel like where I am supposed to be. I have control of my life and I am actually really happy.

As you can tell from the title of this post, this is going to be quite a personal lesson – and it is a lesson which I don’t think I have completely learnt yet – but I want to express my feelings on this subject.

Why am I posting this?

Saturday morning I watched the latest episode of one of my favourite shows “The Bold Type”. This episode included a story line of a woman named Sutton, 26 and a stylist at Scarlet magazine. She is married to a man named Richard, 41 who splits his time between New York and California.

In a previous episode Sutton accidentally gets pregnant. (She forgot to take her birth control pill while enjoying their honeymoon) Her husband Richard is thrilled and she seems to be happy about the situation too. However tragically during the first ultrascan she is informed that the foetus does not have a heartbeat and she has miscarried.

It is after this situation that Sutton feels “relieved” and she states that the miscarriage made her realise that “she doesn’t want kids”.

This leads to a very difficult conversation between Sutton and Richard where Richard gets angry. He told Sutton that he had made it very clear that he wanted children. She said she had never known if she did, and now she knows she doesn’t.

Sutton is only 26 and it could be that she may decide to change her mind in the future, however Richard, being 41, doesn’t want to risk waiting too long. He realises that he has to choose between her and his desire to have children. It appears that he chooses the children and the last words Sutton utters in the episode is “Richard left me”.

Wow – it was a powerful episode.

After watching this episode I went on to the instagram page and read some of the comments from the fans and I have to admit that I was quite surprised by the very different opinions being expressed.

Some women said that Sutton was completely at fault and should have discussed this with Richard before getting married. Other women said that the writers should make Sutton change her mind. Many women applauded The Bold Type for portraying a woman who doesn’t want to have kids (I was one of these).

I believe that there is still a stigma surrounding child-free women. They are often labelled as selfish, unloving or going against the will of God.
I am often asked if I have children and when I reply “no” there is an awkward silence filled with “oh well – some day”.

I am 31 and about 90% sure I do not want to have children. I say 90% because if I were 100% sure I would have actively tried to have the operation and closed the door of possibility immediately.

With this post I want to try and convey not only why I don’t want to have children, but also the feelings I am currently experiencing.

Why don’t I want to have children.

I didn’t always feel this way. When I was younger, I used to dream of the life that my mum had. Having her own house, working 9-5, raising children and going on family holidays while looking after her husband. (Even today I feel guilty if I don’t have my boyfriend’s dinner ready by the time he arrives at my place…)
I would have a daughter who was strong-minded, independant, shy and an avid reader (a mini me…).

I used to believe that this was the life I was supposed to have. I actively pursued this life and was very close to achieving it with two boyfriends in Germany. We split up just before deciding to buy a house together (both times…)

What happened? What are the reasons?

I am not entirely sure, but I think it had something to do with my career. When I was 22 I got a job in the PPE industry and immediately fell in love with the working environment. I enjoyed going to work each day and learning about the products, talking to the customers and discovering SAP.  I enjoyed taking the reins, being a part of projects and making decisions. I loved looking for improvements in my work and sparring with my managers.

9 years later I have worked my way up the PPE ladder and am now managing the entire category – and I absolutely love it! I get the opportunity to travel internationally for work and network with colleagues around the world.

I am pretty sure I could do all the same thing while having a child – one of my work colleagues is living proof of this. She brought her baby with her on business trips. However I don’t think I would enjoy it as much – maybe I would have an inner feeling of guilt?

I love to travel!

I don’t like being restricted in my plans. This is also the reason why I don’t have any pets. If I decide that I want to book a flight and travel to Barcelona for the weekend, then I am going to do it. I don’t want anyone or anything holding me back. Is this selfish? Maybe. But it is my life. I think it would be more selfish if I did this while having a child because then my actions don’t just affect me, but they affect another living being.

I am unfortunately quite a vain person and am very conscious of my body. Since I was a teenager I have been obsessed with my weight and my looks.
The changes that the female body goes through after having a baby are not really something which I wish to experience. I personally don’t think I could deal with it.

I’m not suited to the role…

If you can’t fold a shirt, how can you even think about looking after a baby.

This is unfortunately a quote from 2 of my ex boyfriends. Shirt folding has always been a sore spot in my relationships. I admit it – I just don’t want to invest that much energy into it and thus I end up not folding a shirt perfectly. I fold my stuff the “Marie-Kondo” way and don’t end up having a problem. However I start to believe that men think “bad at folding shirts, can’t raise a child”. 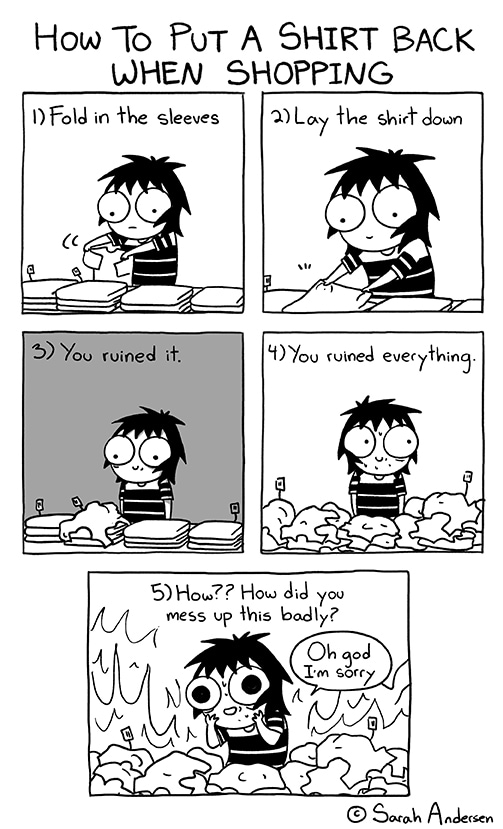 Another one of my boyfriends told me “I don’t think I want a child with you – I think you’d end up giving it food poisoning or killing it”.
This was after I had washed up and accidentally didn’t clean one of the forks properly.  We were living together at the time and I naively thought we had a future together…

A few people have in fact told me that they can’t imagine me being a mother. (FYI – not a nice thing to hear – even if you don’t want a child!). They say that if I did have kids, I would have them raised by nannies or au-pairs. (A justified opinion, since I do also have a cleaner – something that I think my mother is ashamed of).  Yet people also tell me that I am amazing with kids…(I think it’s because I am the crazy woman who will get into the sandbox with kids and spend a lot of time building an awesome sandcastle or run around with them or play video games with them. I am a big kid at heart with a huge imagination!)

So how do I actually feel?

As I said I am 90% sure I don’t want them, yet with every year that passes the sense of inner dread grows. I know that my window of opportunity is slowly closing and one day I will not be able to naturally open that door again.
I am afraid that I am going to be lonely when I am older with no one to look after me.
I am aware that I will not be leaving a living legacy of myself after I have passed away.

Why do I feel this way?
Because I grew up with the notion that motherhood is the ultimate goal. Women who are unmarried and have no children are”old maids” or “the witch down the street”.

My facebook is slowly filling up with old acquantaines and their happy families. Smiling bubbly children and gorgeous looking mums. However I do know not to trust all the photos we see, I can take a pic where it looks like I have a six-pack…smoke and mirrors really.

I do consider myself lucky that neither my family nor friends are pressuring me to have children. I don’t have parents who are desperate for grandchildren.  Or at least if they are, they’re not telling me about it…

So where does this leave me right now?

Using contraception and messing with my hormones/well-being to stop myself getting pregnant.
Feeling constantly anxious about my future.

We’ll see where this leads me…. 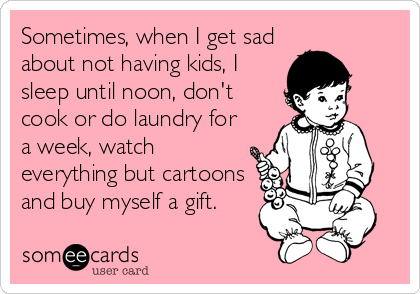 Office feminist by day, hoody wearing geek by night. The extroverted introvert who is happy to dance in a club or spend the evening curled up with a good book.